The friends of Lyndon LaRouche in Africa: dictators, lunatics and genocidialists. (The first in a series) 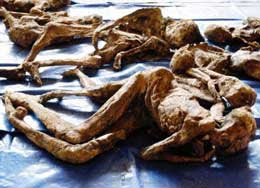 Sometimes Lyndon LaRouche and his cult is described as a racist, nazi cult. I was a member of it once ans disagree. Sometimes the will to try to explain what Lyndon and his cult is like, leads people to draw conclusions that are scary, but misses the point. The racist/nazi label is such a one. It is misleading. The organization is multicultural and "colourblind". It recruits actively people of all creeds, cultures and races.

This does not, however, mean that the cult is not dangerous. Sometimes the will to put labels makes people blind to the fact that potential totalitarian genocidialists today, do not look and act the same way as the totalitarian regimes in the past. So too with Lyndon and his cult.

To fully understand Lyndon LaRouche, I believe one should look at his work in Africa!

As a member I spent much time and energy working with Africa. I was naive. I thought I did something good for Africa. I did not!

Five years after I left the organization I now look back at what I did. Yes, we promoted some economical solutions for Africa: industrialization, irrigation, revolts against the IMF and the World Bank, details about HIV and AIDS. It sounds good, in a sense... Some of it certainly sounds good still today. But WHO was going to build these things, who were the once that was to take up the fight against IMF and the World Bank... Who were the once that should administer the "greening of Africa" that we spoke so much about?

In short, WHO did we cooperate with, and WHO are friends of LaRouche still today?

And this is scary stuff. Just look at the friends of "the old frisky geezer" Lyndon laRouche... It is Mugabe... It is Bashir in Sudan... It was the South African aparthaid regime... It was nigerian dictators... Etc...

And it was people responsible for the greatest genocide Africa has ever seen so far!


15 years since the genocide!

I will start by looking at what the organization did after the genocide in Rwanda.

The genocide occured nearly 15 years ago. In April the airplane of the Rwandan president Habyarimana and the Burundian president was shot down over Kigali. As a result the violence of the Hutu regime against tutsies and oppositional hutus began. RPF (tutsies) launches a major offensive from Uganda. The systematic massacre began at the same time. Within 100 days around 800,000 Tutsis and moderate Hutus were killed. Hutu militias then fled to Zaire, taking with them around 2 million Hutu refugees. For years the hutus continued their guerilla warfare against the tutsies using civilian hutus as shields.

Some time after the organization, under the leadership of Lyndon LaRouche, started a campaign to blame the genocide entirely on RPF and the tutsies.

Looking back I can now see that this was done in a very crazy way. We acknowledged that about a million were murdered, but we never mentioned WHO had murdered them, only that the RPF had "initiated" the violence by the invasion. Thus the genocidialists were not blamed at all. I never heard anything negative about the hutu regime.

Ok. The actions of the RPF, and "former" ugandan intelligence officer Kagame, should be looked at closely. Some things they have done over the years does not look good at all. But still!

To blame the tutsies only, not the hutu regime that murdered 99,9% of all that were murdered in a systematic and planned genocide is almost like if one would have blamed the jews for the holocaust... against the jews... in WW2, and thereby freeing the nazis from the responsibility!


You know a person by looking at his or her friends!

The answer to why the organization, and Lyndon LaRouche, supported the Hutu genocidialists is not known to me. I, however, believe that the organization had friends in the hutu regime already before the genocide 15 years ago, it could have been that they were willing to cooperate after 1994 in order to get allies... I dont know exactly. But I KNOW for sure that they cooperated, it is PROVABLE, as we shall see in the coming posts.

In the years after the genocide the organization started to cooperate with people that have denied that ever a genocide occured, and, what is worse, with known ACTIVE SUPPORTERS of the genocide. Some of the "good friends" of the cult are even wanted by the International Court in hague for crimes against the humanity.

Such are the friends of the great "Humanist" Lyndon LaRouche!

I will in a series of posts go through the details of who some OPEN SUPPORTERS of LaRouche in Africa are! After reading my posts I want you to ask the question who the SECRET supporters are!

This is scary stuff!


Here is the links to all posts in this series:

* A previous post on Lyndon LaRouche in Africa can be found here: http://american-lycurgus.blogspot.com/2009/04/lyndon-larouche-and-africa-development.html

* 1) This post, The friends of Lyndon LaRouche in Africa: dictators, lunatics and genocidialists: http://american-lycurgus.blogspot.com/2009/04/friends-of-lyndon-larouche-in-africa.html

* 2) Wanted, for crimes against the humanity, the case of LaRouches friends in Rwanda: http://american-lycurgus.blogspot.com/2009/04/wanted-for-crimes-against-humanity-part.html

Please look at the documentation by Dennis King on who the friends of LaRouche in Latin America are. You will see that there are many similarities to the work the organization did in Africa: http://lyndonlarouchewatch.org/larouche-fascism.htm