Cult or no cult? (Part 4) Is Lyndon LaRouche omnipotent and Omniscent, or just a macho bully? 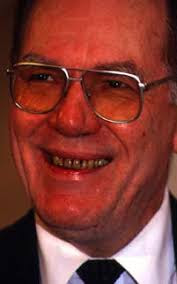 I re-read today what an ex LYM-member posted on the Factnet in June 2004:

"(2) Is it possible at all that one human being should be right about everything all the time? When has Lyn EVER admitted being wrong? Does that sound normal? Therefore, is this someone I should be following, someone who implicitly claims to be infallible about everything? "

Good question. If one looks at the way the organization speaks about its guru Lyndon LaRouche, it actually seems like LaRouche is God.

Lets look at that. I borrowed a thing from this website: http://www.lava.net/~hcssc/Omni-God_Challenge.html )


The basic Christian theology centers around the proposition that there is "One Almighty" omnipotent, omniscient, omnipresent, omni-benevolent "God" (embodied in Jesus) and one less-powerful, less-knowing, less-present, all-evil devil-god named "Satan." A host of "angels", "demons", "spirits", and other supposedly immaterial entities of varying superhuman but less-than-supreme power accompany, assist, and obey either "God" (good) or "Satan" (evil).

The organization believes that:

Lyndon is omnipotent -- that "He" is all-powerful; nothing is beyond "His" capability as a POWERFUL POLITICIAN; WORLD HISTORY CENTERS AROUND HIM, everything that has happened in politics the last 40 years has either been WITH him or against him, no politician has been greater and he is superior in every way, Lyndon is ALWAYS RIGHT (per definition) and has to my knowledge NEVER EVER admitted that he has been wrong about ANYTHING!

Lyndon is omniscient -- that "He" is all-knowing; nothing is outside or beyond "His" knowledge; no mind smarter; perfect in knowledge; He can grasp ANY subject, he is a universal GENIUS; and... Lyndon is ALWAYS RIGHT (per definition) and has to my knowledge NEVER EVER admitted that he has been wrong about ANYTHING!

Lyndon is omnipresent -- everything that happens on this planet has to do with him, all powerful people knows who he is and the evil oligarchs are fighting his ENORMOUS INFLUENCE UPON GLOBAL POLITICS; nothing is beyond "His" reach; "He" is at one with time and space; and Lyndon is ALWAYS RIGHT (per definition) and has to my knowledge NEVER EVER admitted that he has been wrong about ANYTHING!

Lyndon" is omni-benevolent -- that "He" is always good; incapable of evil; no greater love; "He" is perfect in every way; He is AGAPIC... And besides... Lyndon is ALWAYS RIGHT (per definition) and has to my knowledge NEVER EVER admitted that he has been wrong about ANYTHING!

And the enemies you have are all SATANISTS!

Well, Lyndon... If you were omni-benevolent, why do your slaves work seven or six and a half days at the offices, at least twelve hours a day, for NOTHING?

If you were omnipresent, howcome do no politician (more than your dear buddy Mugabe) like you, or even want to cooperate with you?

If you were so damned omniscent, why could you not forecast who bought your underpants, and were the money for food and clothes and housing came from, when you were asked about that at your trial?

If you were so damned omnipotent, why is it that you have often been so wrong, but are such a big COWARD that you dont admit that! (It takes much more strength to admit that one has been wrong, than to never admit any faults or flaws!)

You are no God!

And thus, the organizers and members are WRONG when they hold on to a worldview that more or less ASSUMES AXIOMATICLY that Lyndon is some kind of God.